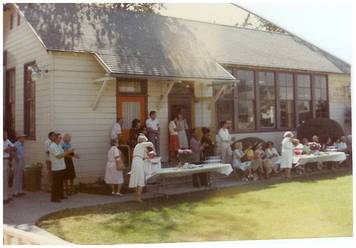 Stanford Settlement was founded in 1936 by the Sisters of Social Service, at the Stanford Mansion, located at 8th & N Streets in Sacramento, the former residence of Governor Leland Stanford.  Along with providing a residential program for teens who were unable to live in their own homes, the Sisters formed groups and programs for young people and adults from the surrounding neighborhood. These vital programs and offerings flourished and expanded, and in 1963,

Stanford Settlement became its own separate agency, separating from Stanford Home for Children.  At this time, the agency was asked to move to the community of Gardenland, which was badly in need of innovative social service programs.

With support from United Way and a building from the Diocese of Sacramento, Stanford Settlement set up shop at their new location, and went to work immediately on leveraging local resources. Working with the Gardenland Community Council and the local business association, the agency helped to ensure that City parks were built, street lights installed, and sidewalks and gutters added to make the surrounding neighborhoods safer.

In 1975, with help from locally elected officials, the County of Sacramento bought the vacant Gardenland Elementary School and deeded it to Stanford Settlement, at which time the agency incorporated, separated from the Diocese and became an independent agency, its own 501(c)(3).

Since moving to the present location at 450 West El Camino Avenue, facilities have been remodeled and new buildings added.  A small Senior Center was built in 1978 and a new larger center was built in 1993, after acquiring additional property.  In 2009 the much larger Teen Center was completed, again after acquiring additional property, and includes an indoor basketball court along with space for activities and a computer lab.

Today, more than 85 years later, many of the programs and activities resemble those of our origins.  There are programs for children afterschool and in the summer; teen programs; senior programs; emergency assistance and participation in the neighborhood and larger community.

Stanford Settlement is a recognized focal point in the north area community for social services.  The contributions of Stanford Settlement to the health and well being of the residents and the neighborhood are tremendous.  Programs and services have expanded and developed through the years to meet the changing needs of the community.